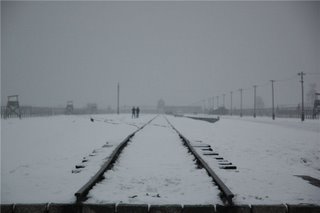 ‘The plot was “intended to be mass murder on an unimaginable scale,” Metropolitan Police Deputy Commissioner Paul Stephenson said’

That was today, approximately 60 years after the worst period of the holocaust.

Well, I’ve been reading ‘Auschwitz’ by Laurence Rees and I can tell you I am closer to being able to imagine murder on an ‘unimaginable’ scale and today wasn’t even close.

It’s an amazing book, one of a list that when I’m ruler of the known Universe I’ll make everyone read. Here is a long quotation about one of the Jews that managed to get himself into a position of responsibility that ensured his survival for just a short time. It gives a flavour of the total, incomprehensible horror.

“Toivi Blatt soon learnt his place in the process: ‘A Dutch transport of about three thousand Jews arrived at Sobibor. The train was divided into sections, about eight to ten wagons, and pushed into Sobibor up a special side-track. There a group of Jews called the Bahnhof Commando opened the doors of the wagons and held the heavy luggage. I was with the other young men standing, yelling in the Dutch language. I asked them to leave their luggage. Women still had their handbags – now they were told to throw them on the side. At that point I noticed in their eyes some kind of special anxiety. They were afraid. Some women didn’t want to leave them and a German hit them with a whip. Then they went straight to a big yard and there a German we called ‘the angel of death’ talked to them so nicely. He apologized for the three-day journey from Holland but now he said they’re in a beautiful place, because Sobibor was always beautiful. And he said “For sanitary reasons you need to have a shower, and later you will get orders to leave here”. The people clapped, “Bravo!”, and they undressed themselves nicely, and they went straight through a whole room, maybe 60 metres long, to a barrack. And there I was again. I was waiting for them. Then the women started coming, completely nude. Young kids, young girls, old ladies. I was a shy boy and I didn’t know where to look. They gave me long scissors. I didn’t know what to do with these shears. So my friend, who’d been there many times, said, “Cut the hair – you need to cut it very close.” But I’m asked to leave a little, especially by the young girls, and not to cut so much. They didn’t know that they will die in a few minutes. Then they were told to go on from the barracks just a few [steps] to the gas chamber. This trap was so perfect that I’m sure that when they were in the gas chambers and gas came out instead of water, probably they were thinking that this was so kind of malfunction.

The process that Toivi Blatt participated in was so efficient, so well designed to pre-empt disruption, that 3000 people could arrive, be stripped of their goods and clothes, and be murdered within less than two hours.

“When the job was finished, when they were already taken out of the gas chambers to be burnt, I remember thinking to myself that is was a beautiful night [with] the stars – really quiet… Three thousand people died. Nothing happened. The stars are in the same place”.

Toivi Blatt, who was 15 at the time, managed to survive the war. When he was asked about how he felt about having to help the Nazis to operate the camp, he said “People asked me ‘What did you learn?’ and I think I’m only sure of one thing – nobody knows themselves. The nice person on the street, you ask him, “Where is North Street?” and he goes with you half a block and shows you, and is nice and kind. That same person in a different situation could be the worst sadist. Nobody knows themselves. All of us could be good people or bad people in these [different] situations. Sometimes, when somebody is really nice to me, I find myself thinking ‘How will he be in Sobibor?”.

Toivi Blatt’s view that people change depending on the situation is one that is shared by many who went through the horrors of the camps. And it is more than just the seemingly banal comment that human beings alter their behaviour according to circumstances, as we all clearly do in our own lives. Obviously, one behaves differently at a rock concert from how one would at a funeral. But Toivi Blatt points to a fundamental change in extreme circumstances that is less a change in behaviour – though that occurs as well – and more a change in essential character. It is as if, for people like Toivi Blatt, the realization came in the camps that human beings resemble elements that are changeable according to temperature. Just as water exists as water only within a certain temperature range and is steam or ice in others, so human beings can become different people according to extremes of circumstance.”

What would you do to survive?