Said goodbye to another car today. This one didn’t have a name though, although it was female at least! My lovely Audi TT is gone, off to an auction where she’ll be poked and prodded and sold off like a slave to a Roman Emperor. There ought to be a website where you can record the history of a car so that successive owners can post their experiences and memories. Make it happen!

Anyway, in the four years I had it I had lots of fun! wedging people in the back seat, getting the bottom of it stuck on a low wall and burning part of the wheel mechanism off (ahem) and many more. It’s still a gorgeous car, there isn’t a lot out there that can compete with it for the money, but four years was a longggg time. 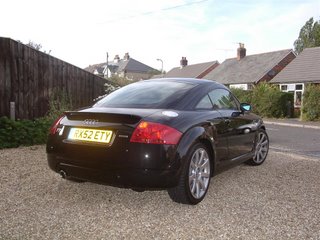