I know I rarely post about music and I also know that I’m still obsessed with Your Body is a Weapon by the Wombats, but I’m completely and totally hooked on this amazing cover of Bowie’s Sound and Vision by Beck. It features over 160 other artists, from yodellers to choirs to an orchestra to rock guitarists and even a hugely cool guy playing a Theremin! As if that wasn’t enough, it was recorded in an intimate environment where Beck stood in the middle of the audience who revolved around him and in turn had the musicians revolved around them! You can watch the entire 360° experience online, but for now just dive into this brilliant song… 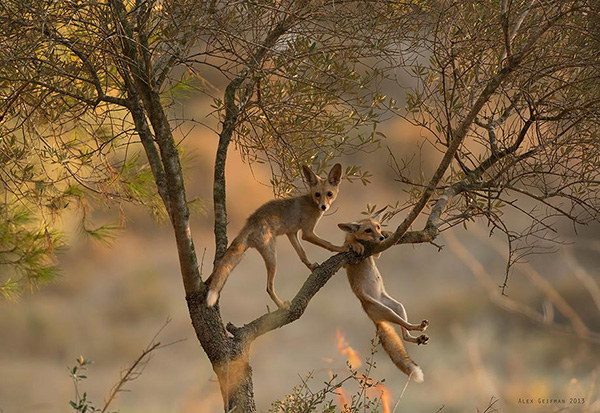 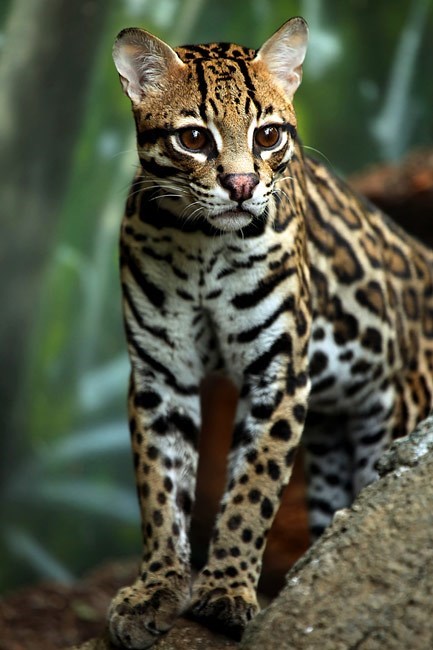 Oh and as a quick aside, the painting that is the subject of The Goldfinch

in the article below is an example of a “Trompe L’oeil“.

So, you haven’t got an idea what it means either?

Well, it means “deceive the eye” in French or as we’d say a “trick of the eye” and describes the art technique of using realistic imagery to create an optical illusion of depth. The simplest and most obvious example of this is the image below… 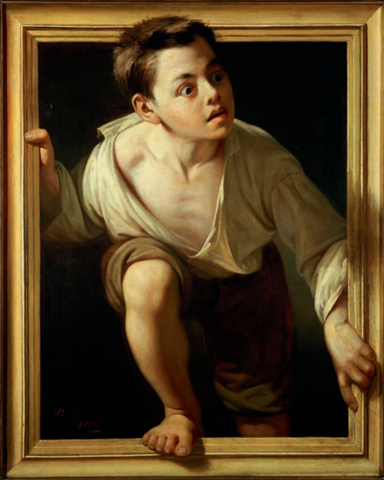 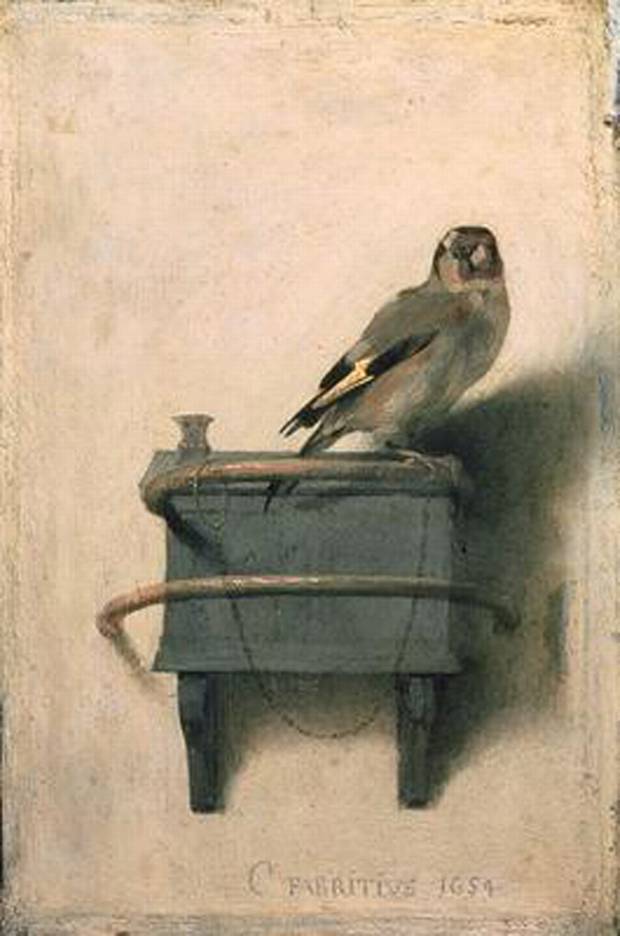 Most amazing evening ever… check in to The Ritz for the night, then get taken for dinner on the Orient Express with Raymond Blanc as the chef! 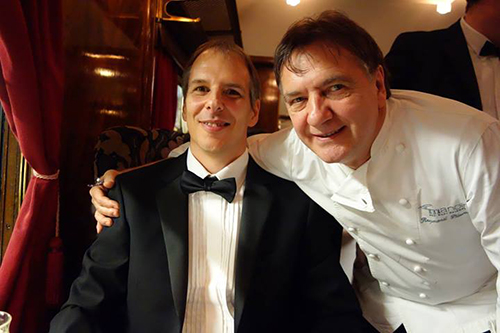 Have also recently re-read the brilliant “The Memory of Running”. I love the story of how Smithy finally begins his transformation so much…

“When did I become so turned in on myself that I swallow feelings like fast food and everything tastes the same salty way?”

Also read the second book in the Oryx and Crake trilogy by Margaret Atwood and just wasn’t impressed. The Year of the Flood is the story of when mankind is wiped out by a super virus that floods over the planet but the characters were just… bleagh.

It did have some good passages though…

“Beauty is only skin deep, she thought. But why did they always say only?”

I’ve been to Lime Wood Hotel for dinner twice now and it’s been spectacular  both times. Set in the cute shaggy pony infested New Forest, Limewood is beautiful hotel and spa set in lovely grounds.

On my first visit I was overjoyed and dismayed to choose the duck hearts to start. Overjoyed because they tasted lovely and I was glad I’d been brave, but dismayed because I WAS EATING THE HEARTS OF THREE DUCKIES! And even worse, they looked like cute little hearts in my dish. 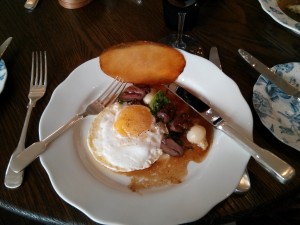 Just recently I returned to Limewood for Sunday lunch and it was even better. I had the roast chicken and it had the most perfect texture and consistency. The staff were incredibly friendly, even to the extent of us asking for a yorkshire pudding and they brought out a huge bowl stuffed with them. It’s not the cheapest place by far, but if you like decent food and a lovely informal service in a beautiful setting then you can’t go wrong. 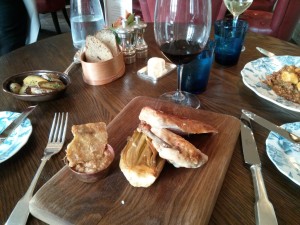 So, thanks to another “well deserved” gift, I recently had the opportunity to drive six supercars around the Cotswold countryside.

The event was with DreamCarHire and to be honest before the day arrived I was expecting it to involve driving along in a procession at around 40mph whilst being watched like a hawk. How wrong I was!

We arrived in a small village to be greated with a beautiful sight (the bacon sandwiches, there were also some cars outside). After a very well done safety briefing (“It’s your licence at risk”) we were taken outside to meet the first car of the morning a rather studly Nissan GTR. 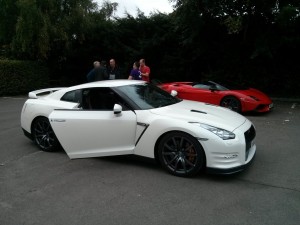 In what seemed like about 2 minutes, Jen and I were on the road, with a map and a destination to aim for and no-one around us at all. So, I screamed and floored it of course!

Now, it’s about 10am at this point and I’m already spoiled. I started complaining! I found the ride quite crashy, it didn’t make an amazing sound, it felt quick but not rocket ship quick. I had to take a second to realise I’d been given the keys to a damned amazing car and ought to slap some sense into myself quickly!

After getting lost on pretty much the first map instruction we eventually made it to the meeting point and I switched over… to… oh god… a Lamborghini LP570 Superleggera. I must admit that for the first 43 years of my life I wasn’t the hugest Lamborghini fan. About .2 seconds after driving off in it though I was in total, complete, screaming, love. It was stunning. The guy who went through the controls with me said that it was designed just for one purpose, to put a huge smile on your face. And wow did it over achieve. I spent the next 25 miles screaming and grinning and saying “fucking hell oh god fucking hell” repeatedly. I’m not exaggerating, that’s all I did whilst listening to the amazing sounds of the 570bhp V10. I was back to being 12 (I’ve not really ever left being 12) and was very, very happy… 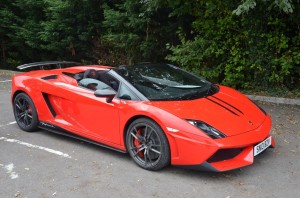 Next up I have to hang my head in shame, the company had specifically brought my dream car over from Europe, just for me, as they knew how much I wanted to drive it…. and I am sorry to say that of the 6 cars I drove that day it was my 3rd or 4th favourite! It was, of course, the beautiful Mercedes SLS AMG. In its favour it made the most amazing noise, akin to a WWII bomber flying on just one engine, but it was too typically Mercedes inside, the interior really didn’t stand out considering we’re talking £165,000 worth of car. I did love driving it, but, for shame, in the words of Lily Allen it just didn’t make me scream. 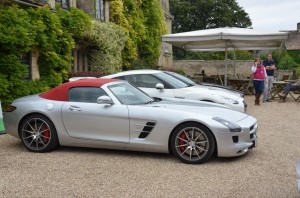 We had a lovely lunch and a good natter about cars (I forgot to mention there were 12 guests and 6 cars, so we just swapped cars throughout the day) and then it was, I’m almost incapable of believing, into a Mclaren MP4-12C. A car I never dreamed I’d drive. It was unbloodybelievable. I felt like I’d been transported to the 23rd century and was just speechless as I drove this car in a “spirited” manner down the country roads. I even found out that it had a huge air brake that comes up if you break in a “spirited” manner as well. The interior was beautiful, the scissors doors were amazing, but the thing we both remember was the noise. It was like a T-Rex eating Godzilla whilst King Kong was trying to bugger it. Don’t try to picture that by the way. 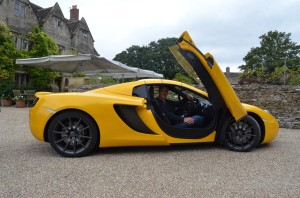 Whatever came up next was going to feel like a disappointment. Considering it was a Ferrari 458 and I climbed inside and started to criticize everything about it “I don’t like the air vents, I don’t like the seats” then I think I deserved a bit of a slap back into reality. One area it trounced the Mclaren was the steering wheel. Just look at it… 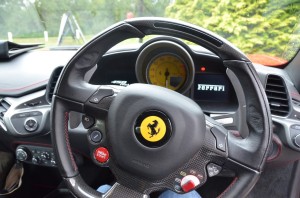 Now, the Ferrari wasn’t the one we were supposed to have. DreamSuperCars had used a competitors car as theirs had issues… and it’s safe to say that this 458 had seen better days. Like, at around XXXmph the vibration was so bad my eyes spontaneously exploded. Also, when I say XXXmph I mean 50mph as I didn’t drive at XXXmph. It did make a fantastic wailing noise when poked though and did look the absolute business. 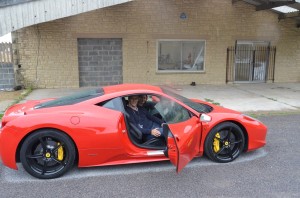 The final car of the day now arrived… Now if someone had told me a month before that I was going to get to drive an Aston Martin DB9 I would have yelped with excitement. However it was poo. Poo Pooo Pooooo. Because clearly by now I was totally spoilt by proper supercars and this mere £130,000 so-called-car was just not in the same league. Also it had some tracking issues that didn’t really inspire confidence! I’m glad I drove this car when I did though as it had started to rain and if I’d been in the Mclaren then they’d still be using a spade to pick bits of me up off the countryside! 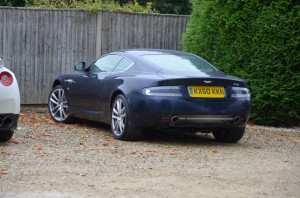 The final highlight of the day arrived… we’d managed to wangle a private tour of the Williams F1 collection! And the awesome car hire staff said the words I was dreaming of… “What car would you like to drive to the Williams HQ”. Woohoo, I’m gonna get back in the 4WD Lambo.

Then to my eternal shame, even though I had 4WD and 570bhp I struggled to keep up with the guy I was following… and he was in a Ford Focus! We had a brilliant tour of the collection and trophy room and I finally got back to the hotel with a smile that will never, ever, be wiped off my face. What a day! 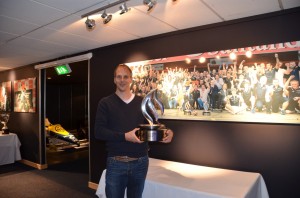 (me with Maldonado’s winning trophy from the  Spanish GP)