As I’ve just read another Second World War book, I decided to re-watch (and believe me, I never re-watch things) the Band of Brothers mini-series as I liked it so much.

But I needed to find images that so perfectly summed up the heartfelt emotions that the series brings out… and couldn’t find them anywhere on the internets.

So, please excuse me taking pictures of my TV but here are the images… 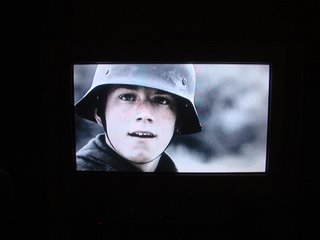 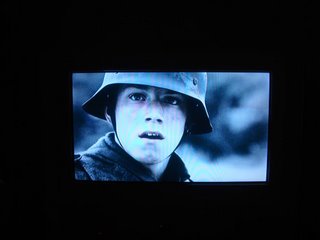 The scene is based around Major Winters, the central character in the series. He suddenly appears in front of this German soldier, a mere boy, who’s initial reaction is to smile and shrug, he couldn’t imagine that today was the day he was going to die. The second frame shows realisation dawning just before he’s killed. The series shows that this was one of Major Winter’s haunting memories of the experience of war, and what an experience it was.

The whole series is *stunningly good*. The great looking, Captain Speirs, reputed to have killed unarmed German prisoners, the wonderful, unlikely friendship between tee-total Winters and regularly drunk Captain Nixon, the excellent vivid photography, but most of all how it transports you into their world that even now you can’t really imagine. How did any of them survive?

Most of all though, it’s the fact these are real guys. Go look up Major Richard Winters, William ‘Wild Bill’ Guarnere on the internet, or visit Bastogne or Carentan and realise that this wasn’t so long ago and happened to people like you.