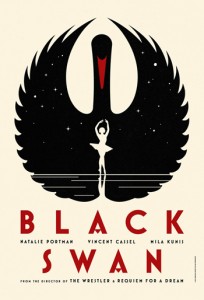 So I finally got round to watching it and wasn’t Natalie Portman totally perfect?

She manages to capture the emotions of simple happiness, abject misery, shame and desire on her face so perfectly. But most of all she can cry, boy can she cry! I had always felt that the image of her furrowed forehead as she sobs was common in a few of her films but hadn’t realised quite how many until I saw this video clip. True isn’t it!

As for the film, wow. Everyone in it (apart from Winona who I just couldn’t imagine as a ballet dancer) was sublime and the subtlety in which the use of mirrors showed Nina’s many transformations including from good to evil, from innocence to adulthood and so many others was just amazing.

It still didn’t manage to beat The Fountain as my favourite Darren Aronofsky film, mainly because it had a perfect soundtrack, but it was still a fantastic movie and she really deserved that Oscar. I had my cat sat on my lap during the film and I am sure I was stroking her a little too distractedly in certain scenes!