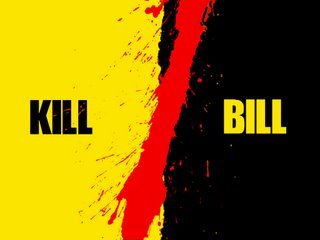 I recently watched the two volumes of Kill Bill again. Wow, they are just cinematic perfection. They’re more like works of art than films – sure the stories and action is great, but all the time you’re watching it you feel like the story and the film itself is incedental to the art and the references. For an example of the number of movie references in the film, look here. Crazy attention to detail! On that note, I read that

“In the Showdown at House of Blue Leaves, before the fight scene when Beatrix Kiddo walks over a clear glass tiled floor, the phrase “FUCK U” forms the tread pattern on the soles of her trainers”

Hehe! I really do hope that he creates Anime prequels and sequels to the films! That reminds me, I must watch Jackie Brown, the one film by Quentin Tarantino I haven’t seen.