I really don’t like Nicolas Cage movies… except when he’s playing a loser or a jerk. I can’t stand him as some arrogant hero type. In Lord of War he plays a very successful arms dealer. Of course, you kind of know from the beginning that things are going to unravel around him, but they do in a really beautifully visual and eloquant way.

The movie has so many fantastic quotes, here are just a couple…

“I sell guns to every army but the Salvation Army”

“They say, “Evil prevails when good men fail to act.” What they ought to say is, ‘Evil prevails.'”

His relationship with his wife (who he’s adored from childhood) is excellently done – the way he engineered their meeting was perfection! These two quotes pretty much sum up how it’s going to go…

“There are two types of tragedies in life. One is not getting what you want, the other is getting it. “

And his brother, played by the guy from the awesome Requiem for a Dream is such a great drug addict! I think he should only ever play drug addicts.

Anyway, it’s hard not to like Nicolas Cage. Oddly, it’s also hard not to like his character, even though he’s an evil, corrupt gun-runner. I guess this is where the film succeeds so well, you start off clearly hating this guy “because arms dealers are bad”. But then life gets more complicated. And towards the end you realise that you’re own little safe, naive opinions about how great you are and how bad other countries are get slowly unravelled to reveal a complicated ugly mess.

Finally, click to look at this damned amazing poster! 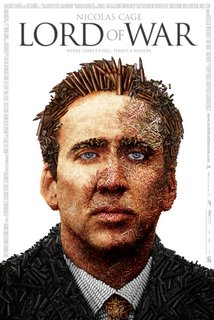