On Sunday I cut the hedge, with a hedge trimmer. Basically a big, noisy, toothed device. Did I get part of my body stuck in it?

Of course! Mucho blood and nearly-fainting and trying to staunch the horrific wound (OK OK it was just a 2cm cut on my finger, although it is still bleeding now 24hrs later when I just checked the bandage).

And because of that I missed my long run yesterday and decided to do it today instead. It started pretty badly as it was heavy rain but I soldiered on like a hero. Half way through the run I found an abandoned airfield with a big fat runway so decided to have some fun (!) with my Garmin GPS thingie, here is the result… 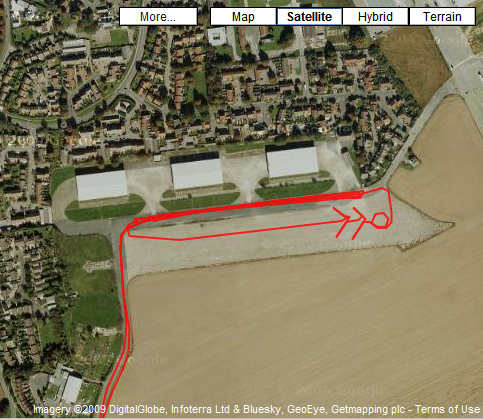 I mosied on my way in the heavy rain and thought to myself, this isn’t going so bad. Then a man about 20ft away from me behind a hedge decided to shoot a pigeon with a shotgun… jesus christ I’ve never leapt so far into the air. I hope he missed the pigeon, lovely pigeonnsss.

By then I was getting pretty hot even though it was raining and also noticed a slight amount of discomfort in the nipple region, oh no I thought, I’m wet, I have nipples, my shirt is sticking to me, my nipples are gonna be sore damnit. But anyway it didn’t really hurt that much so I soldiered on.

Now, you need to be sitting down to view the next photo, as when I got home this is the condition of my shirt… seriously, sit down… 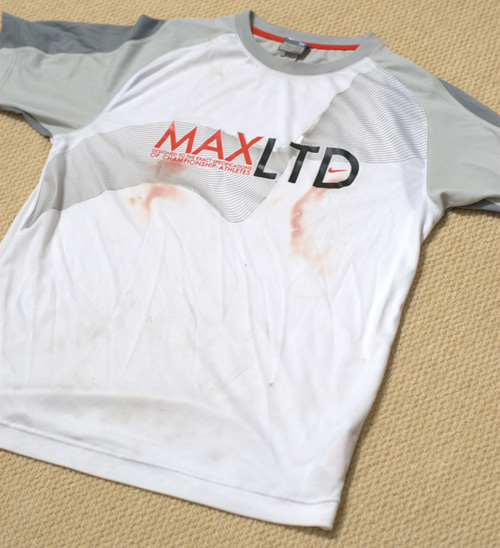 Ouch Ouch Ouch! I was convinced I’d worn them off! Luckily it looked far worse than it really was and most of the marks on my t-shirt were watered-down blood. But, even though, OUCH! So, I googled and found out that bleeding nipples is apparently really common on long runs and there are lots of solutions from vaseline to plasters to something called “nipguards”, so I shall be making some prompt purchases! The run was pretty good though, 1hr 24mins for 10miles, in the wind and the rain, with no nips.