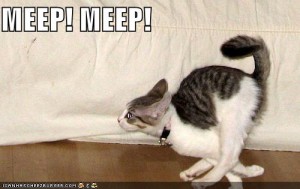 Earlier today I had a big BUPA health check, prodded, stabbed, measured and assessed… of course I won the first prize and made the doctors cry at my perfection… but boy did I want to fail and have them find something wrong with me!

The reason? I’ve foolishly decided to stick to my goal about running a Marathon, a word that I think deserves a capital ‘M’ (for Moron, Madness and Misery).

You can’t just "run a Marathon" though, it’s a bloody miracle to get a place, are there really that many stupid people who want to do this? It seems so.

So over the last month I’ve been investigating places with various charities, "Stroke the Badger", "Pet the Pony" and "Adore the Pete" didn’t seem to exist as charities, let alone have any guaranteed tickets to Marathons, but luckily Macmillan Cancer Support did have a place and as they’ve helped my family in the past then I applied with them.

Unfortunately they’ve let me have a place )-:

What the hell am I doing?