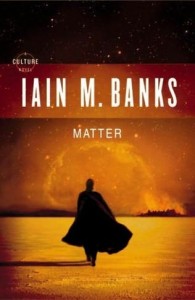 I’ve just finished the latest crappy-covered Culture novel, ‘Matter’ by Iain M. Banks. Wow this guy has an imagination! In this latest story you meet such things as Nestworlds, one of the living places for a species called the Morthanveld. This ‘world’ is 300million km in diameter, 1million km deep and contains 30 trillion living creatures! Fark. Yet this world is only one tiny part of the novel.

I found the main thrust of the story a little difficult to accept. It centred around a species that lived on one level of a planet. Imagine a world that was constructed like a Russian doll with 15 levels to it and a different species living on each level. Now I know that’s a little difficult to grasp but that wasn’t my problem at all. The issue I have was that this species of human had been contacted by space dwelling civilisations which are as effectively powerful as gods. They’ve been given little kicks in the right direction of technological advancement, they have alien ambassadors with their own embassies… and they kind of just accept this.

Now surely the entire society would collapse? If you knew that there really were aliens (not Paris Hilton, real ones) and that they mingled with us on our planet, do you think life would carry on as normal? No chance! But this society (who are at the technological level of steam power) seem to not think too much of it at all. Odd. Maybe it’s because they’ve had this contact with aliens for many years and that makes them as strange as sheep/cows. I dunno though, cows and sheep are in most cases of lower intelligence than humans, although I have seen my sister try to work an iPod. It’d be a bit strange to be not the pinnacle of evolution and science on your own planet.

Anyway I never really talk about the stories much on my blog as it annoys the hell out of me if someone gives sommit away, but it revolves around a royal family that have been wronged and go to external influences to put matters straight. It starts off a bit slowly and I missed the big space weapons and huge scales, then it got faster and faster and ended in an awesome climax of techno-nerd-porn that made up for any dull moments earlier.

Time for mandatory quote… let me find it…. ah yes, this covers a small section of the story where a Culture Special Circumstances Agent goes into a bar. Now, imagine what happens when you go into a bar in downtown Southampton… right, now imagine this…

“She was quickly greeted by a small cloud of brightly coloured creatures like small birds, each thrown by one of the bar’s patrons. Some sang welcomes, others fluttered strobed messages across their hazy wings and a few squirted scent messages at her. This was, currently, the latest greeting-fad for new arrivals at the 303rd Aliens’ Lounge. Sometimes the lobbed creatures would carry notes or small parcels of narcotics or declarations of love, or they would start spouting insults, witticisms, philosophical epigrams or other messages.”

See, imagination! Who on earth could think stuff up like this? How do you even go about it? I wonder if Iain sits there and thinks “Right, woman goes into a bar, hmm, how to make it interesting”? Or does it just flow right out?

The only things that flow right out of me are…. actually let’s not go there.

p.s. did you know if you type Culture into Google, the second match that comes up is Iain M. Banks version? wow.

Oh, and p.p.s. My name is Peter Mattison and I work for American Telephone & Telegraph, Global Business Services as an Information Technology Architect.

In Matter, the main character is called Merisphine-Sursamen/VIIIsa Djan Seriy Anaplian dam Pourl and is a Special Circumstances Culture Agent.

Godamn, even putting my company name and job title in full she still whips my ass.