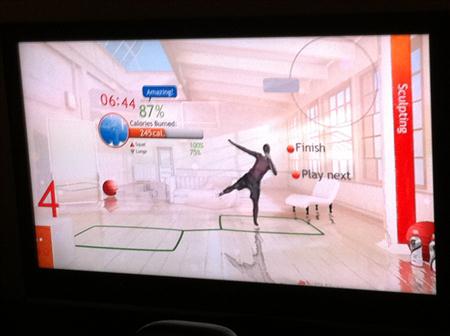 Here are two shocking words side by side…. “Microsoft” “Revolutionary”. You’re shocked aren’t you. I wanted to actually write “Microsoft” and “Game Changing” but that’s three words (-:

Microsoft Kinect is damned impressive though. It makes the Wii and Sony Playstation Move look like the products of a caveman who hasn’t yet discovered his hair is on fire. The number of times I see people using the Wii and it’s saying “hold down A and the hidden button B” and they just look blankly at the screen and then the two controllers in their hands. With Kinect you are the controller – it sees everything. Trust me when I say it sees everything as I’ve tried and succeeded in proving that hehe.

Your Shape : Fitness Evolved is the most impressive “game” from the launch, it’s incredibly accurate and speedy and the way you can actually watch yourself on the screen (not an avatar or a body shape image, it’s actually you, it can even read labels on clothing) as you exercise is very cool indeed. It also manages that trick of making you forget you are exercising, you’re so distracted by the screen interaction it’s only after 30minutes or so that you realise quite how seamless it is. I wonder how many gyms will start offering personal Kinect sessions? I can’t wait to see the technology spread into other home environments.

By the way, when you’re exercising and your cat walks across the floor to rub against your leg, you’re so impressed that your cat appears on the TV that you’ll quite forget not to kick it accidently in the head. Ooops. Poor fatty!

Yes, the photo above is me, balancing on one leg and trying to take a rubbishy photo (-: