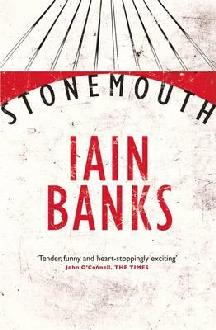 )-: Ever since learning of the impending loss of my favourite author I’ve been re-reading all of his novels… and to my great delight I realised that I’d not yet read his latest, Stonemouth.

It is a soooo typical Iain Banks book, ticking all of the usual boxes “coming of age story”, “set in Scotland”, “lots of flashbacks”, “redemption and forgiveness” and I absolutely loved it. So much so that I read it in a single sitting, finishing at 2:45am.

It’s fundamentally a story about all of us who grow up, fall in love, screw up and want to get forgiveness we don’t deserve. Stewart Gilmour had everything, great friends, beautiful girlfriend, the world at his feet… and threw it all away. That sounds like a typical tabloid story but what is different is that he grew up in a Scottish town run by two mafia/gangster style families and his love interest was the daughter of one of the family heads… bannished from the town for years he finally gets permission to return for a funeral and through a series of flashbacks we learn how he managed to get everything so wrong as he tries to put things right with the girl who he thinks he doesn’t really deserve.

The story is relatively run of the mill, with great friends, brilliantly believably dialogue and a tense build up to a typical Bank’s finale. But one thing I loved so much was that there was a “way out” for the protaganist, an almost too easy excuse for his misdemeanours that he’s slowly piecing together through the plot… but in the end Banks decides not to use this get out of jail card and just let the characters find their own way forward. To me this was a brillian piece of plotting, to build up and up a critical part of the story and just let it fade out. Wow.

I’m going to really miss Iain Banks and his stories and I hope his last months are as pain free as possible.