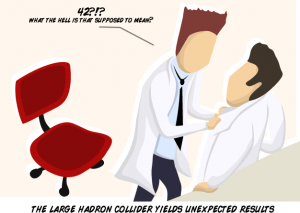 In 5 days time, the 10th of September, the universe might be sucked up its own bottom.

It’s not really, but I wanted an excuse to mention this quote in relation to the firing up of the Large Hadron Collider at CERN. Some critics are worried that there is a chance it’s going to destroy the universe…

Is shaving that dangerous then? eep I might have to go beardy. The reason is apparently that such devices as the large hadron collider produce approximately one black hole a second. Yes an actual black hole. But only a very very very short lived one. We hope.

p.s. have you visited the homepage? You’d think with a several billion euro budget they could have designed a webpage that wasn’t from 1992 wouldn’t you?