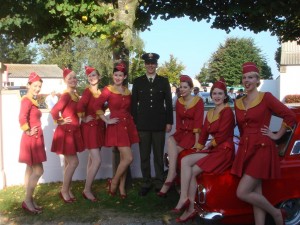 The above photo says everything that can possibly be said. But I’ll say some more anyway. Last weekend was the 10th anniversary of the Goodwood Revival. A long weekend of period (which seems to be anything from 1940’s up to the 1960’s) motor racing, air displays and fun.

As per normal, something is bound to go wrong… and it did. Big Time.

There were eight of us going to the Revival. And my responsibility was buying the several hundred pounds worth of tickets. Which I did, with my Dad, some months ago. Woohoo all done and sorted.

So, Thursday night, before my parents arrive in the morning, I woke at about 3am thinking “I haven’t seen those tickets for a while”. And then failed to get back to sleep, just imagining the worst. At 7am I got up and started hunting for the tickets. I couldn’t find them. Oh.Good.God.

Then I found them woohooooo phewwww I can relax. There are the eight tickets now in my hand.

So, panicccccccccccc. I got on my bike, rode like the wind to Goodwood and ran slightly moist into the ticket office and pleaded total stupidity and being male. It didn’t work. The lady correctly pointed out that just because the tickets hadn’t had the stubs torn off didn’t mean they hadn’t been used and that I could just buy eight more. I whimpered more and waffled and begged and pleaded poverty (and then said that I went to the swanky restaurant at least once a week and had the night before spent £160 attending a champagne party oops). It eventually worked and she said “the best I can do is take these tickets off you and tell you that if you come in on Saturday morning tickets will be waiting for you”. I woohooooo’d and rode home, all sorted.

Of course, I didn’t sleep the next night as “what if she was ill and wasn’t there to give you tickets” as Ali kindly suggested might happen… but I was at the office at 7am and got the tickets phewwww.

So, we had a great day, the number of people dressing up was amazing but what really made it special was the number of actors mingling with the crowds. Everything was authentic, not a single vehicle newer than 1966 was allowed in with the 150,000 people. Luckily both my sisters were born before 1966 so they were allowed in hehe) 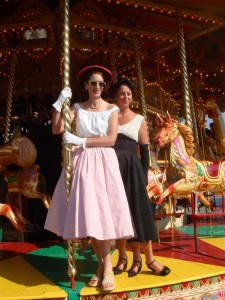 As we arrived some 1940’s police tried to arrest my Mum for not having a licence for the fur animal she was wearing, then some guys would try to sell you silk stockings from a suitcase only to be chased off by the police. 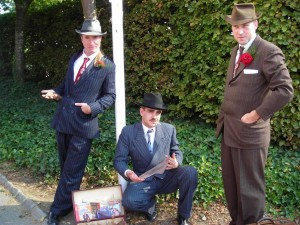 I saw russian spies, Laurel and Hardy, Marilyn Monroe, kids from Just William, Dad’s Army, Bikers and Mods having a big fight and so many more, was so cool. My sister even scored with a dishy road-work guy…

Didn’t get to see much car racing but will make up for that next year. Am glad everyone in my family had such a good time (I’ll work my Mum into this photo somehow) and it’s such a shame they can’t make it next year. 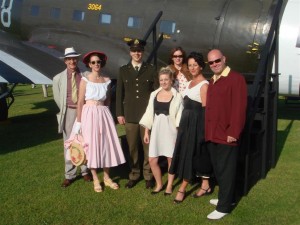 No, really, you can’t make it. Trust me, stop asking, I’m busy that weekend and the event is cancelled and and and. (-: