It’s taken me a long time to be able to write about this film… it was so (almost) perfectly perfect in every way that it tunnelled straight through my heart and out the other side – and has managed to cement the book as my favourite of all time.

In the trailer you see the moments before the most pivotal and important scene in the book… when Richard Parker leaves without looking back, without saying goodbye, completely botching the farewell. I don’t think I took a single breath in the minutes up to this moment in the film, would they make it into a sickly Hollywood style happy clappy version? Thankfully, they didn’t, it was the most perfect moment ever and I blubbed through it entirely. I wonder what you thought about it and what you felt?

“What a terrible thing it is to botch a farewell. I am a person who believes in form, in the harmony of order. Where we can, we must give things a meaningful shape. For example – I wonder – could you tell my jumbled story in exactly one hundred chapters, not one more, not one less? I’ll tell you, that’s one thing I hate about my nickname, the way the number runs on forever. It’s important in life to conclude things properly. Only then can you let go. Otherwise you are left with words you should have said but never did, and your heart is heavy with remorse. That bungled goodbye hurts me to this day. I wish so much that I’d had one last look at him in the lifeboat, that I’d provoked him a little, so that I was on his mind. I wish I had said to him then – yes, I know, to a tiger, but still – I wish I had said, “Richard Parker, it’s over. We have survived. Can you believe it? I owe you more gratitude than I can express I couldn’t have done it without you. I would like to say it formally: Richard Parker, thank you. Thank you for saving my life. And now go where you must. You have known the confined freedom of a zoo most of your life; now you will know the free confinement of a jungle. I wish you all the best with it. Watch out for Man. He is not your friend. But I hope you will remember me as a friend. I will never forget you , that is certain. You will always be with me, in my heart. What is that hiss? Ah, our boat has touched sand. So farewell, Richard Parker, farewell. God be with you.”

The rest of the film was almost faultless, it didn’t need the girl in it but that’s just the way it is with appealing to demographics, all of the casting was spot on and the computer graphics… wow! It fully deserved its Oscar success for making the unfilmable, filmable. 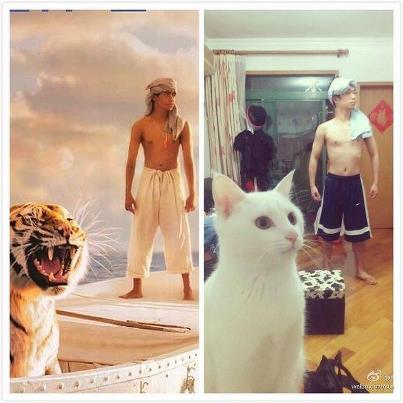 First up the actual trailer for the Life of Pi

movie… one of my favourite books of all time as I’ve mentioned many times before. The trailer is incredibly beautiful… but… is it almost TOO colourful? I did love it but have a slight worry that it’s going to look like CGI (which of course it is) too much. Spoiler warning, it even has the most beautiful scene from the book, the moment when Richard Parker leaves Pi.

, a book I struggled with on the first read, mainly because I was a bit dim when it came to threading all the stories together. However the film looks stunning and reminds me to read the book again before it comes out. Also unsurprisingly features “Jim Broadbent looking confused”…

p.s. This trailer may wall disappear as there seem to be a lot of take-down requests going on at Youtube


Finally if stories are just too much like hard work then Samsara might just be the thing for you. It’s by Ron Fricke, the same guy who filmed the amazingly titled Koyaanisqatsi which is just an amazing visual and audible experience to have on in the background on a big TV. Samsara (which means ‘The ever turning wheel of life’) has taken 5 years to make over 25 countries and is a showcase for all that is amazing about mankind. Also interesting is that it was filmed, yes filmed, on 70mm!

I can’t embed this one so just follow the link…