I just spent a great week in Marrakech…. if you’re ever thinking of going then Dar Zemora is the place to stay, it was a truly fantastic “Riad” (sort of posh house palace thing) with only 5 rooms, a great pool, amazing staff, wonderful architecture, awesome food, amazing staff, lovely setting and amazing staff. But *best* of all was that we were pretty much the only guests so it was like it WAS MINE, ALL MINE. Sigh, why am I not rich?

Anyway, Marrakech reminded me of a quote in a book about the Vietnam war I was reading. The quote was something like “The village boy went from the 15th century to the 20th century in just a few seconds” as he saw something like an American air strike coming down on him, meh, I can’t remember the quote so good. But anyway, in Marrakech in the year 2008 it was possible to go from a cultured quiet modern environment to seeing a poor beaten donkey trotting his sorry ass down some dangerous street delivering camel hides to a market seller, very scary. You can go from incredibly poor bums to swanky 21st century night club just by turning a corner. So, my highlights…

But mainly, totally, top of the list by a long long way…. was this item on a trendy restaurants menu… 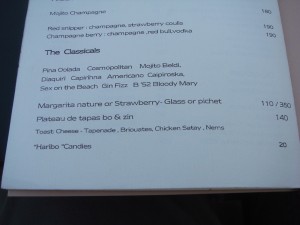 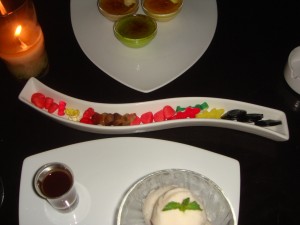