So, I sold the lovely Lotus… why did I do that?!!?! Well, I guess the fact that I doubled the mileage on it but then managed to sell it for a profit was pretty good. And it could be a complete pain in the ass at times when it refused to start or overheated. But I missed it terribly and had to replace it with something just as stupid…

As I passed my full motorbike test in 1999 and decided that it was crazy to buy a motorbike as every other road owner tried to kill me all the time… then it seems the logical idea as I’m such a calm, level-headed person in relation to speed that I’d buy an 800cc motorbike and see how much of a dent I could put in a tree…. 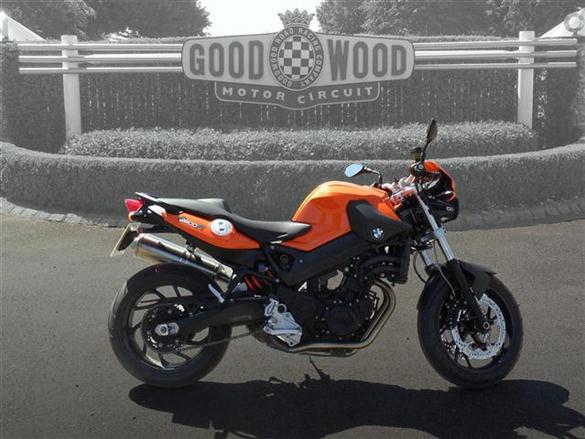 I scoffed at the suggestion that I would have to ensure that my helmet and jacket needed to match the bike… what sort of tough, goateed motorbiker colour coordinates! Then I proceeded to buy an orange and black helmet and a jacket with orange highlights in it! So Gayyyy! The whole process of buying the gear (helmet, armoured jacket, armoured trousers, armoured boots, armoured gloves, back/spine protector for over a grand) was much more traumatic than buying the bike itself.

As for the experience of riding, well it’s bloody terrifying. I talk to myself out loud (i.e. reverberating inside the helmet) all the time saying things like “oh god oh god a bend oh god”. It’s also a very very odd experience sometimes because the helmet makes the bike completely invisible so it’s possible to imagine that you’re flying along the road at 60mph, very surreal! I’ve only completed a few hundred miles so far but every journey has some unwanted excitement – pheasants running out in front of me, a bee managing to get inside my helmet, testing out the ABS unintentionally, peeing myself – all the usual things (-: I can’t’ say I’ve enjoyed it yet but it’s getting slightly easier to stay on the road at least. One thing that I find great is the nodding – other motorcyclists nod to each other as they pass on the road. Some do a sideways helmet tilt nod, some go for the more traditional sort… and the ones who I nod to tend to ignore me hehe.

Finally, everyone I’ve spoken to about a bike has told me various horror stories… “he lost his arm and his girlfriend who was on the back died”… “our friend was decapitated as he rode home from our house” type of stories. In fact when I was getting insurance quotes one company had the following positive review “this company were great when I lost both my legs on a motorbike accident”. So, if there is anything of mine you might like (apart from my body and the motorbike as they’ll be attached to a tree) then let me know!