I failed miserably to get Olympic tickets in the ballot earlier this year and kind of thought “oh well, it’ll probably be a bit of a joke anyway, Britain won’t get it right”.

Then I watched the opening ceremony in total shock and awe.

Then it got better and better with some amazing sporting events, really positive press and a ridiculous number of gold medals for TeamGB.

So I spent the final week of the Olympics thinking, shall I buy tickets to the closing ceremony as there were a few very expensive tickets left. My thought patterns went from Yes, No, Yes, Yes, No, No, No every single day as I kept trying (the completely rubbish) for availability of events.

In the end I could resist no longer and a couple of days before the event I bought the tickets and proceeded to PANIC. What if my seats were accidently allocated to someone else? What if the queue to collect the tickets is so long that I don’t get in in time? (rational huh).

Of course I then proceeded to be very calm and chilled out – well… I got to London on Sunday at 10am and went straight to the ticket desk (no queues at all!) and then mooched around the stadium for SIX HOURS before the gates opened (ignoring a quick trip to Tower Hill to catch the marathon runners). I was at the front of the queue for the park entrance, then the front of the queue for the stadium entrance and managed to get to my seat a good 3 hours before the event started, calm eh!

The seats were amazing and apart from nearly killing myself by falling down 43 flights of stairs by leaning on the LED thingie that lit up behind everyones seat only to find it was held on with a cable tie I tried to remain calm. We were all instructed by the pre-show compere of what was expected of us, dancing, waving, single particular lines of songs etc and then the countdown began.

From then on it was pretty much a sensual overload. I seem to remember some bits – Eric Idle, the John Lennon and Freddie Mercury bits, the Kaisers being awesome, crying a lot and screaming a lot more, the beautiful Damien Hirst flag on the stadium floor, the beautiful phoenix covered in flames. But much of the rest of it was a blur of awesomeness.

Then, I realised that I was IN THE SAME ROOM (ok, admittedly I was sharing this ‘room’ with 85000 other people) as Alessandra Ambrosio! It couldn’t get any better than that… apart from the stunning fireworks at the end. I like to think the fireworks went off when she caught my eye, right? 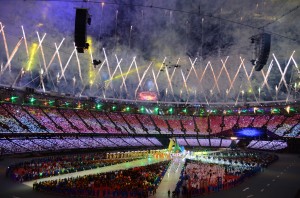 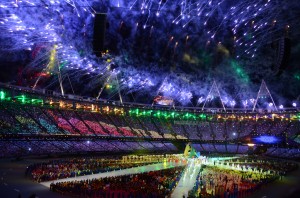