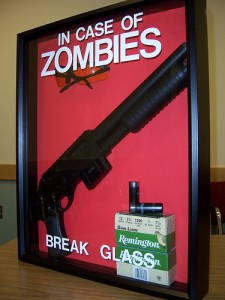 Listen carefully, this is going to be important one day, hopefully soon.

When, not if, when… mankind is attacked by zombies (oi, stop scoffing, you won’t be laughing when some undead bugger is munching on your leg!) you’ll need to be prepared. I’ve just finished reading Zombie Survival Guide

so I have some basic advice for you.

UPDATE: Sigh, I thought at last the day was upon us! The BBC today announced a massive swarm of zombies!!!! It turned out to just be computers infected with a virus. Sigh, I wanna destroy the undead’s brains!