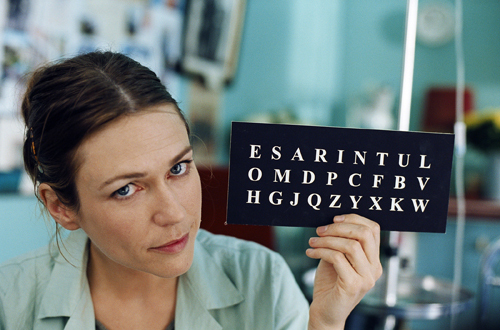 It seems to me that there is only two states of mind that most of us live in when it comes to health… normally “It won’t happen to me” and luckily rarely “Why me?”.

This film really makes you think of another option… “Oh boy please let it not be me”. Telling the true life story of a man in his 40’s who has a stroke and becomes totally paralysed and can only communicate by blinking one eye, it manages to break your heart at the same time as making you adore the guys capacity for being able to cope and make the best of his situation (yes I’m aware that sentence was too long). He clearly still has a sense of humour, loves to flirt, is still the same guy… but never during the film is there a hint that he is going to get better. In fact he rails against friends who talk of God and miracles being the answer. It had a great soundtrack and was beautifully shot, with a real sense of both motion, taunting the guy, and then being trapped behind his eyes. Oh and the scene with the guys Father, gut wrenching.

How does it end? Well, how can a film like this end apart from heart-breakingly. But it made me at least stop complaining about not having a Macbook Air and not being 20 any more. For about 10minutes. Watch it!