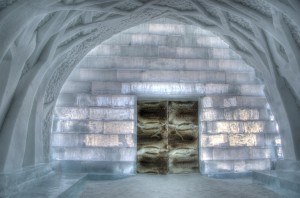 Am just recently back from the most *amazing* place… the Ice Hotel in Sweden. It’s actually in the Arctic Circle… and I bet like me you had no idea what the Arctic Circle really is? It ain’t an Arctic Roll so don’t get any smart ideas. I’ll let you google the answer (-:

So the holiday was for three nights… and I must say it was stunningly expensive. The reason is all of the trips on offer – as it’s kind of a once in a lifetime sort of trip you want to cram in as much as possible. So this meant:

However I could not fault it – three days of amazing activities, two goats, loads of reindeer, wild moose, huskies, poniez and ice! The weather was amazing – only -16 at night and between -10 and 0 in the day time which is fine – a couple of months before it was -42 there and apparently hell!

Oh… and I saw the Northern Lights again. I have no idea why I capitalise the words as they were once again crap. And I’m fed up of meeting people who say there were stunning! I’ve only ever seen them as green/white splodges in the sky and nothing like you’d see on National Geographic. 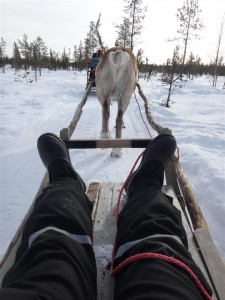 Next a nice relaxing sit on a chair made from ice… 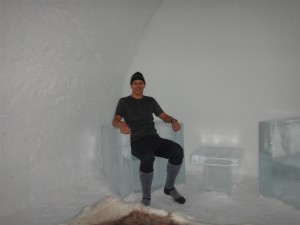