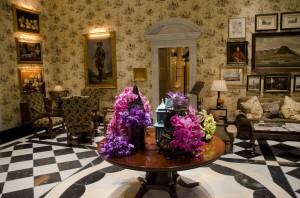 So last weekend was my birthday – eep! and I was lucky to be taken to The Savoy! I’m sure many of you had watched the documentary about the £220m refit of this most famous hotel… well I can confirm that every penny has been well spent.

In the past I’d never really wanted to go, it seemed to epitomise the same aspect of London as Harrods inhabits, sort of posh and blingy for the sake of it and full of idiots with more money than sense (or taste).

However, like any really good hotel should, it manages to treat itself as a sort of living museum, the staff were pleased to play a part in that museum – they’d take your photo at dinner, tell you little secrets about famous people etc. None of them looked down their nose (especially as per normal I breeze in wearing jeans) or acted like you were lucky to be there. We were eating dinner at the River side restaurant that evening so decided to get a light lunch – except we ended up eating absolutely gorgeous Steak and Onion Pudding in the attach Savoy Grill run by Gordon Ramsay. But a quick swim afterwards must have easily worked off around 4 of the 2000 calories I’d consumed (-:

After cocktails in the famous American Bar (mohito for me of course) dinner started with a truly superb rare seared tuna followed by fillet of beef with an oxtail-celeriac fondant. The beef (and Jen’s lamb) was cooked perfectly. I was stuffed after dinner but it seemed rude not to have a pudding (-:

We had to wait a little while to get into their lounge bar for after dinner cocktails, but once in there I never wanted to leave (even after seeing champagne for £16K a bottle, I mean, who would ever be so vulgar to order something like that, I’d be mortified even if I could afford it – and I’m sure I wouldn’t enjoy a drop of it).

Breakfast the next day was superb although slightly odd eating in the lounge area and a nice walk along the Thames failing to take any fricking decent photos with my camera rounded the trip off perfectly!

By the way, I did some reading about the Savoy on my return and didn’t realise quite how old it was (1889) but also quite how cool it was. Apparently it was the first hotel in the country to have ensuite bathrooms and electric lights and lifts. Even the American Bar was where cocktails were introduced to Europe! Although I find it hard to imagine that nobody had worked out how to mix a bloody drink before 1889.