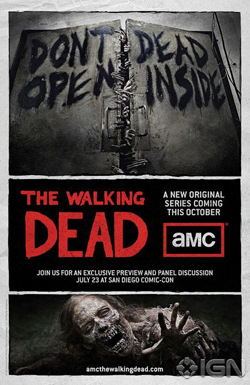 My obsession with zombies hasn’t diminished unfortunately – if anything it’s getting even stronger.

Two things haven’t helped. First of all I find out that a good friend has the same “switch off” routine when he goes to bed – i.e. considers zombie apocalypse scenarios and plans his first few hours response. I do exactly the same except my plan is infinitely better (it involves… waittttt… I’m not telling you! If I do then everyone will turn up at my secret location wanting to share my emergency stash of starburst and profiteroles!).

Secondly, the awesome The Walking Dead series on TV recently. It was nearly perfect! It covered all the important issues, the main one of which is that the biggest worry isn’t the dead but the unhinged rednecks who will cause much more trouble. I said it was only nearly perfect – I was disappointed to see a zombie pick up a rock and try to smash a window with it… not allowed, they’re brain dead! Also the characters in the series call the dead “Walkers”. Nonono, OK I accept calling them zombies might be a bit much all of the time, but they should at the very least be called The Dead shouldn’t they!

I can’t tell if you’re nodding in agreement or just nodding and backing away at my crazy ideas?