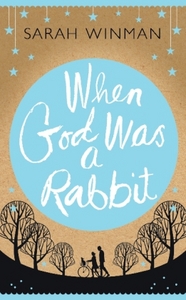 by Sarah Winman… it’s an odd book with a very strange and beautiful title (a near perfect title I think). In terms of story – one of growing up with secrets and sadness and love – it’s not actually that great. The problem to me was that there was just too many different characters and themes and timespans… and it was like every character in the book was the central one. But that really leads to the strength of the book in that every person was brilliantly drawn and rich, especially Arthur who had been foretold the time and method of his death (both wrong!). I also loved the nature in the book, beautiful deer, the rabbit in the title and the other surroundings of the family home to name a few. Elly herself was a complicated, interesting character with a few chapters that really jarred with the rest of the book and the whole “disaster turned good” second half of the book was a step too far, arghhh but there were so many good parts! It’s odd to finish an often whimsical book like this then remember that it has child abuse, murder and cancer in it!

Well, it sounds like I really didn’t like this book – but I did, it’s a very worthwhile read but do so for the characters rather than the story and you won’t be disappointed. And just think – god could be a rabbit!