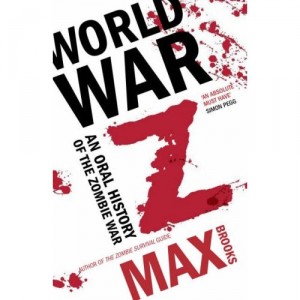 Woww, I *so* want the world to be attacked by a plague of zombies that wipes out most of the population! Surely you can understand it’s a good idea?

See how cool the idea seems? The reason I mention it is that I’ve just finished reading World War Z

by Max Brooks (son of Mel). It’s an “oral history” (basically lots of short interviews) with the survivors of the planet after an outbreak of a pathogen which kills infected people then reanimates their corpses as zombies. The book covers the rumours of the outbreak, the global panic that follows and the struggle for the following decade to finally conquer the zombies and reclaim the planet for mankind. In fact, more than just mankind as the zombies will kill any living creature.

Like all good fiction, the book makes you think what you’d do in such a case. It turns out that one of the best choices is to head above the snow-line (places like Alaska) as then the zombies freeze solid and you can easily bash the brains out of any that you find (-: In the book many millions of people fled to sea and ended up on islands which were great… until it was realised that zombies don’t stop at the waters edge, they’ll carry on going on the bottom of the sea until they come to the next dry land! I also liked the idea that when a zombie sees you it’d let out a typical zombie-moan which would in turn attract and zombies within range who would let out the same noise… now this worked really well in the war against them as it was possible to just get one zombies attention and that would snowball into literally thousands of them all ending up in the same place… and then getting their brains blown out! It had lots of good snippet facts such as why zombies have white eyes (it’s because they don’t have any fluids in body so their eyes are scratched white) and that zombies don’t eat meat for food and will eventually burst from eating!

I live in West Sussex, a relatively low population area… but still nowhere near remote enough to be safe in the event of an outbreak. The book indicated that zombies were relatively easy to evade providing you didn’t come across huge groups or get cornered… So I think what I’d do is get as much fuel as possible, warm clothes and tools, then put all of these things in a car along with my bike, then drive as far as I could north (which isn’t likely to be far as in the book all the roads became jammed and everyone stuck in the cars became zombie-snacks). Then once I’d run out of road I’d travel by cycling until I was in the remotest part of Scotland I could find and try to live off the land there. I guess trying to sail somewhere even more remote would be worth a try… but you’d need to make sure you didn’t get the same idea as millions of others. Hmm, that might rule Scotland out then.

It would be exciting though! And would beat work any day. p.s. try not to moan too much next time you see me as I might justttt decide to place an axe through your skull. (-: